When performing triage forensics in Windows computers full hard drive images are not obtained, instead only a small subset of files that can potentially have critical information are collected in addition to other volatile evidence. Triage analysis is much faster than collecting and analyzing a full forensic image and in many cases it allows to determine which hosts require a full forensic investigation and provide input for a deeper analysis.

One of the tools that allows raw access to copy locked files is sleuthkit, as it is free to use and flexible. To copy the locked files we will first use ifind to determine the metadata address of the file to be copied and then run icat to dump the file. Make sure to include all sleuthkit dll files on the same folder that sleuthkit executables and to run it with elevated privileges. The syntax to run ifind and icat command is included below.

In the following example I show how to collect the system registry hive with this method.

Since sleuthkit does not use graphical user interface, it can be used in wrapper scripts in vbscript, powershell or any other language. With some automation you can collect all the files that you require, such as Window registry files, amcache and NTFS MFT files.
Publicado por d4v3c0d3r en 19:50 No hay comentarios:

In the ideal world every system should apply the software updates to fix the vulnerabilities, but in reality it is common that not all systems are patched due to various reasons. Therefore it is useful to have compensating controls that will allow detection and/or prevention of the attack. Even if all the best patching practices are followed, these rules can be used to generate intelligence about our adversaries, that can be used to enhance existing defenses or develop new ones. In this article we will explore how to test this vulnerability in a lab environment in order to develop a snort rule to detect and prevent attempts to exploit it. As a second goal we improve the rule to not only log the exploit attempt web request but also the response sent by the server, which will allow to know if the exploit attempt was successful or not and assign the proper priority for response and containment.

Lab setup and install
The first step will be to get the required software mentioned below to setup the vulnerable lab system. I decided to install it on a Windows host, although it can also be installed on a Linux system if you prefer.


Create the environment variable JRE_HOME and assign it to JRE install Path, in my case it was “C:\Program Files\Java\jre1.8.0_121”
Start tomcat web server by running startup.bat script within bin subfolder on tomcat folder.
Check that java.exe is running on port TCP 8080.
Access website http://IPaddress:8080/webapp-name/index.html, default tomcat website must be displayed.

Exploit test
Download and run the exploit from http://www.hackplayers.com/2017/03/exploit-rce-para-apache-struts-cve-2017-5638.html. We can see that the exploit works correctly without any additional modifications; however it returns the HTML code after the executed command, which is not desired.

Exploit improvement
By removing everything after the string “<!DOCTYPE>” we can improve the output.

We run the exploit again and now we only get the result of the command sent.

Snort rule creation
Now that we can successfully exploit the vulnerability in a lab system, we can develop and test the snort rule to prevent the attack. By analyzing the exploit, we can see that the vulnerable header is Content-Type. On normal web requests this header, as its name suggest, is used to indicate the media type of the resource, valid examples of it are “application”, “audio”, “image”, “multipart” or similar, as defined on the following RFC document: https://www.w3.org/Protocols/rfc1341/4_Content-Type.html
The exploit assigns this header to an abnormal value "@ognl.OgnlContext@DEFAULT_MEMBER_ACCESS)." With this information we can create a detection rule.

Snort detection
Run the exploit again and snort should detect it.

If we open the generated pcap with Wireshark we can see the command that the remote attacker attempted to run, in this case the command whoami.

Snort rule improvement
We have successfully detected the attack attempt, but the response is not captured only the request, therefore only based on the generated pcap by Snort, we cannot know if it was successful. So we will improve the rule to capture the response sent by the struts web server. To achieve this, we will set a condition using flowbits option in  the first rule and will create a second rule that will log the response if that variable is set.

Snort detection of both request and response

We open the generated pcap in Wireshark and we can verify that the output generated by the victim web server has been logged, in this case it is the hostname of the victim computer. 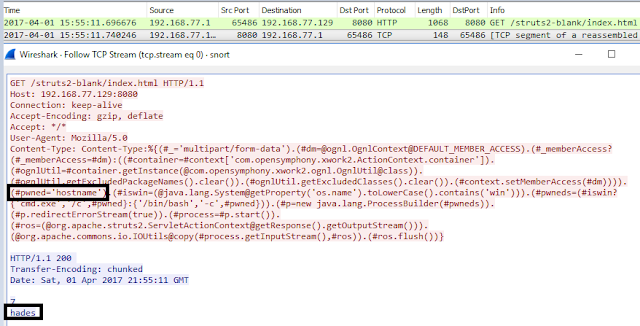 In case that the answer is very large, only the first part of the output will be shown, but that will be enough to determine that the attack has been successful and the nature of the extracted information. Below you can see the results when the attacker ran tasklist command. 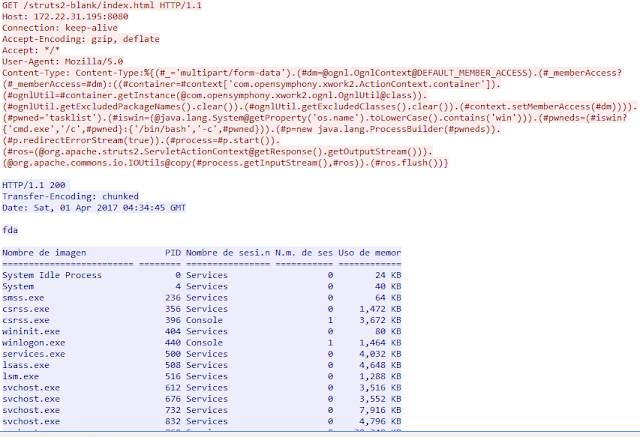 Finally to prevent the attack and not just detect it, change “alert” for “drop” on the first rule in case that an IPS device is available and inline mode is setup.